Find great deals on scratch-and-dent items as well as one-of-a-kind product prototypes at our Ebay Store! 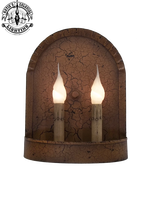 At Katie's Light House we have some very strict quality control standards. We don't send you anything we wouldn't be proud to display in our own home, confident that it will last long enough to become an heirloom in its own right. Items that don't make the cut go into our scratch-and-dent inventory. They are joined there by the various experimental designs and finishes we build as part of the process of developing new products. Rather than throw them away, we auction these items off on ebay, where they can often be had for a significant discount relative to brand new items. Our ebay store also has lamp parts, kits and primitive tin nick-nacks!