Someone claiming to represent a Hollywood production studio placed an order for a number of replica antique light fixtures with Katie's Colonial Lighting. According to the buyer, the fixtures are intended for the set of the upcoming movie, Twelve Year's a Slave, slated to be released in 2013. 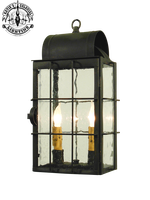 The full-length feature film stars Brad Pitt, Benedict Cumberbatch and many other A-list actors, and is directed by Steve McQueen. According to the Internet Movie Database (IMDB), Twelve Years a Slave is the story of "A man living in New York during the mid-1800s [who] is kidnapped and sold into slavery in the deep south." It is based on the true story of Solomon Northup, whose personal account of his experiences are chronicled in a book by the same name. The charictaristically long Victorian subtitle of the book holds more potential revelations about the plot: "Narrative of Solomon Northup, a Citizen of New York, Kidnapped in Washington City in 1841, and Rescued in 1853, From a Cotton Plantation Near the Red River, In Louisianna."

The agent of the production company also alluded to the fact that Alice Baker, the set director for Twelve Years a Slave, has used Katie's Colonial Lighting products in other movies she has helped direct. He did not name the films, but KCL light fixtures can be spotted in a number of blockbusters, including The Alamo, National Treasure, The Patriot, Tom Hanks' John Adams mini series, and many more.

When asked why he thinks movie producers are so keen on KCL fixtures, our owner and operator, Rich Lavy responded, "Authenticity, affordability, and the fact that it is all American made...made by hand." "They also seem to like that we do custom orders," he added. Usually KCL products are electrified for use in the average consumer's home, but the studio in question requested that these particular chandliers and sconces be made for burning candles rather than electricity. "This is pretty typical when we receive orders from production studios," Rich said.